In this post I want to describe a design for investigative databases. Unlike the tooling that I’ve been working on for influence mapping projects, this approach is intended to be simple, reliable and extensible.

The basic idea is to make sure that all data sources are loaded as tables in a shared, relational database. This includes both large data sources (e.g. company registries) and small snippets of data with only a few lines. And that’s basically it, too: no user interface, no complex data modeling, no cloud hosting.

While such a database isn’t of direct use to journalists, it can be a working bench for data scrapers and developers who want to explore the data. Even better, analysts can quickly generate reports for journalists using ad-hoc queries. This way we can begin to analyze the data before investing time into fancy visualizations and interfaces.

Even better: the database you’re building will stick around as you enter new investigations, and you will be able to quickly try out a fuzzy join and see if any of the companies in this week’s dataset also turn up in a past list (or a large database of permanent value). In this way, the data store can become a first step towards a journalistic memory, a long-time archive of relevant knowledge.

I first used this pattern for data sites, such as OpenInterests.eu. While the resulting sites contained a lot of data, when asked an analytical question, I would often prefer to query the staging database, rather than using the web site. With the explorative Mozambique extractives project, I finally began to realize that such a raw data warehouse could actually be the primary output of a project, rather than just a useful step on the path there. 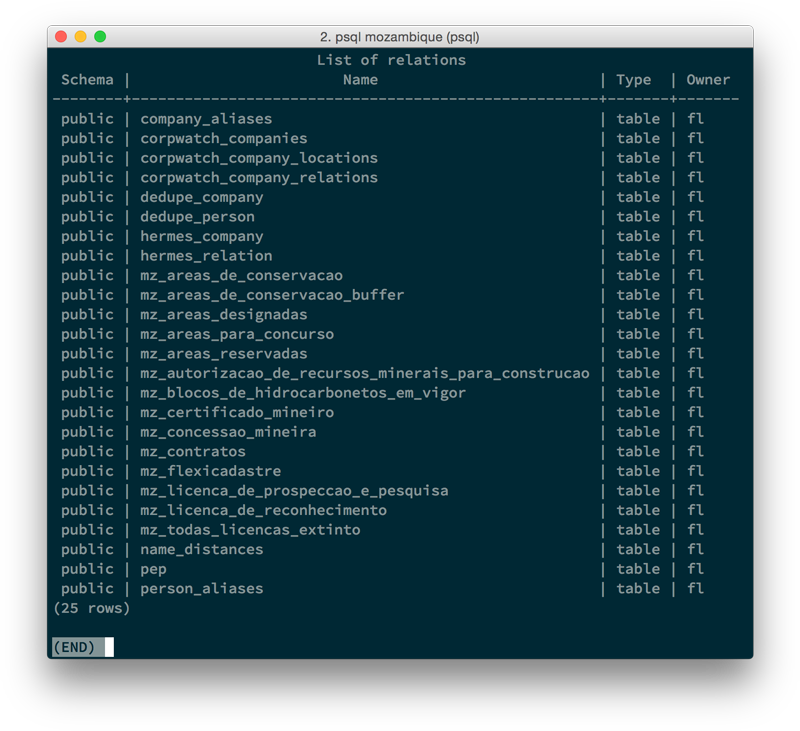 A variety of data sources relevant to exploring extractive industries in Mozambique.

While it is far removed from the hipster universe of civic data, I believe that the world of enterprise data warehousing has a lot to teach us. I first learned about business intelligence while working on OpenSpending: a financial dataset should be subject to strict data governance and exist in a normalized form in a database, prepared for analysis.

But while data warehousing principles dictate that the database be perfectly clean, they also talk about operational data stores, interim databases in which data is loaded, cleaned and enriched in a fairly ad-hoc manner. This might offer a better metaphor for what I’m proposing: a very large, and evolving workbench of data.

Some basic rules for such an investigative data warehouse might be:

These are obviously very basic rules, but they’ve proven useful in some projects now, where they’ve helped to create a valuable database beyond the scope of a single inquiry.