In November 2011, the Shuttleworth Foundation awarded me a so-called flash grant. Flash grants are an awesome idea: instead of a full fellowship, a smaller sum of money is given to people, with only the condition of reporting about their activities to the world. Since I haven’t been blogging very much about many of the projects in which I’ve been involved over the last few months, here’s a small recap.

Soon after receiving the grant, I decided that I wanted to use this time to work on two areas: promoting the idea of open government and open data in Germany and helping advocates and journalists to make sense of open data and to use it for their purposes.

In Germany, things are either done very properly or not at all. Many options are considered, few are tried out. While adopting this attidude in opening up governemnt is not surprising for political actors, German geeks seem to be doing the same: instead of using their technical skills to create digital civic infrastructure, many are now running for office. While this is an interesting development, it also means that there are few interesting open government initiatives. 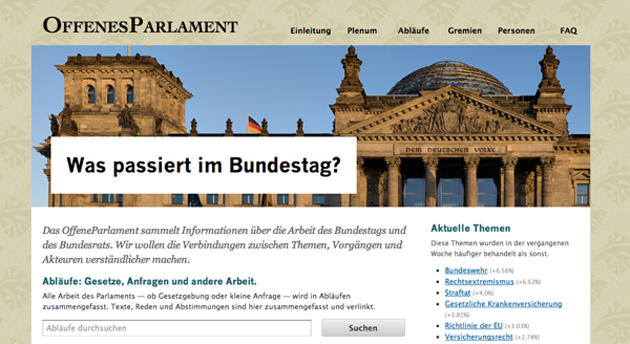 As a demonstration of the kinds of tools needed, I spent a lot of time in October and January trying to to productize OffenesParlament, a legislative tracking site for the federal parliament. It allows citizens to easily search parliamentary business, speeches and to subscribe to updates about a specific topic or politician. The site has recently entered entered its beta phase and we’re now actively seeking more coders to help with further development.

But software along is not enough, so together with fukami and the support of various NGOs (OKFN, CCC, Digitale Gesellschaft and the Open Data Network), I helped to organize a series of hackdays across Germany, in Hamburg, Berlin and Cologne. The events helped to connect different data initiatives, but attendance was low, showing a need for more professional organizing.

A working group at the cologne open data hackday.

Based on these experiences of trying to grow the German community, we’re currently in the planning stage of an open government incubator. Our goal is to raise a small fund which we can use to support civic hackers who want to initiate new projects — an initiative that is obviously inspired by the flash grant.

Data as a tool for advocacy and journalism

As more and more open data becomes available, the question of how it can effectively be used to inform public opinion becomes more salient. Two key groups in this, journalists and advocates, are often inexperienced in using information technology — not to mention raw data.

In late January, I was able to join the African Media Initiative and the World Bank Institute for a three-day data journalism workshop in Nairobi, Kenya. As I’m writing this, I am on my way to Chisinau, Moldova, to contribute to a similiar event organized by the same groups. Through the OKF, I also had the opportunity to participate in the School of Data Journalism in Perugia, Italy, and Data Harvest, a meeting of EU-focussed investigative reporters in Brussels. I was further able to lend a (web-designing) hand to the awesome team producing the Data Journalism Handbook, a collection of texts about this emerging practice. 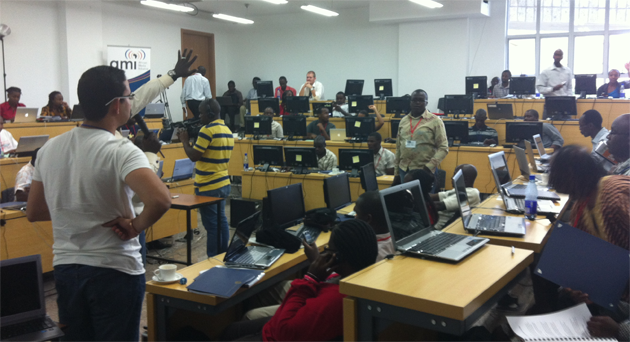 Although the external conditions of these events are very different, their goals are very similar. We’re trying to establish a dialogue between journalists and coders, the explore how data can be used to make better news. Our work there is focissed on introducing journalists to new strategies and tools for information acquisition, processing and presentation. On the other hand, I have learnt a lot about investigating an issue and telling a story from the people I’ve met.

A recurring technical need articulated both by investigative journalists and NGOs hat I talked to was a tool for the mapping of actor networks. Such a tool would allow its users to create a structured analysis of the relations between different companies, persons or organizations involved in a certain topic.

To explore this question, I teamed up with the Corporate Europe Observatory, LobbyControl and Friends of the Earth Europe to create a site around the European Union’s lobby register. After creating a prototype discussion piece in December, a lot of data cleansing work lead into a second demo version of the site near the end of March.

The data work, however, proved not to be the most challenging part of the project. It became clear that defining how the information can best contribute to the campaigning goals of the organisations would be key to the site’s development: What is the message? What are the key topics we want to focus on? We therefore decided to invite the Tactical Technology Collective to join the project and to use their experience in facilitating this design process.

The backend technology of the lobby register project, a software called Grano, is a re-usable service for actor and relationship mapping, which I hope to develop into a journalistic tool in the future. It could help to enable the evidence-driven analysis of power structures in an accessible way. 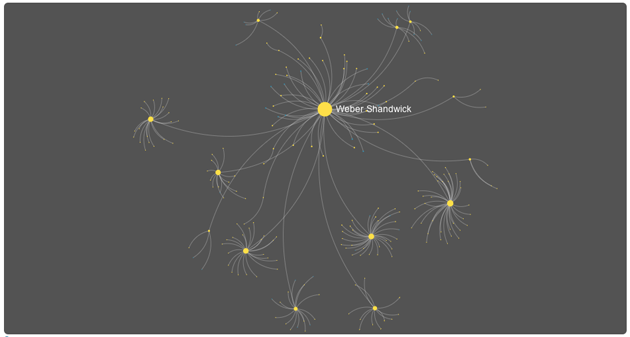 I tremendously enjoyed the freedom afforded by the flash grant. Defining your own work turns out to be a hard job, but it is a fantastic way to explore a domain like open data. After taking on a new role as tech lead of OpenSpending in February, there was unfortunately less time for me to work on independent projects. Still, I hope that some of the initiatives spawned over the last six months will evolve into useful tools and active communities.