As a twentysomething, white male in the tech industry, privilege really shouldn’t come as a surprise to me. Yet during my recent time in Nepal as a trainer for the Data Bootcamp, I’ve been the subject of positive discrimination to a degree which I hadn’t experienced before.

Before reaching Nepal I started to notice a change in treatment, as I was moved to the emergency exit row over a made-up rule requiring passengers in that space to speak English. Upon arrival, airport police had quickly identified me as a candidate for the diplomatic desk on immigration, simply by virtue of being the only European who wasn’t obviously on a spiritual excursion. This happened repeatedly; when checking into the return flight I was pulled out of a line of buddhist monks to be directed to the business class check-in.

Over the ten days, I felt like I was treated like royalty. The only places where I was not were the temple sites at which everyone was either a holy man or white tourist and the Kathmandu hacker space, where folks had a different frame of reference for interacting with me. I was grateful that when hanging out with these fellow coders, as I finally got a proper sense of the relaxed, funny and smart people I had the pleasure of visiting. 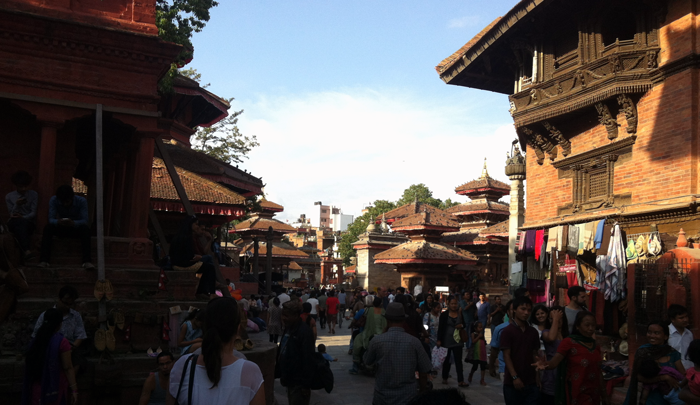 Elsewhere, this treatment would at times get almost comical, like when our tour guide in the Thamel area of the city insisted on using a World Bank business card to gain us access to the royal palace.

What concerned me most, however, is that I have no good response to this. Refusing the special treatment always resulted in a lengthy discussion and much waving of hands, and eventually I would give up. I’m not even sure what prompted this treatment: did people just expect me to freak out if I had to queue with everyone else? Did they hope for a small bribe as a thank you? Or did they just believe that “fair skin” and a credit card entitled me to those benefits?