Over the last few months, I’ve had the pleasure of joining a few discussions regarding the long-term management of data inside Spiegel. The company is already running DIGAS, a massive, hand-curated archive of news content from the past decades, including articles published not just by Spiegel but also by many other German and international news outlets.

Can the same thing be created for data? A well-stocked data warehouse filled with the outputs of previous investigations would certainly make a great asset for journalists and researchers, but the diversity of topics and fast pace of the environment make this hard to achieve.

What problem needs to be solved? 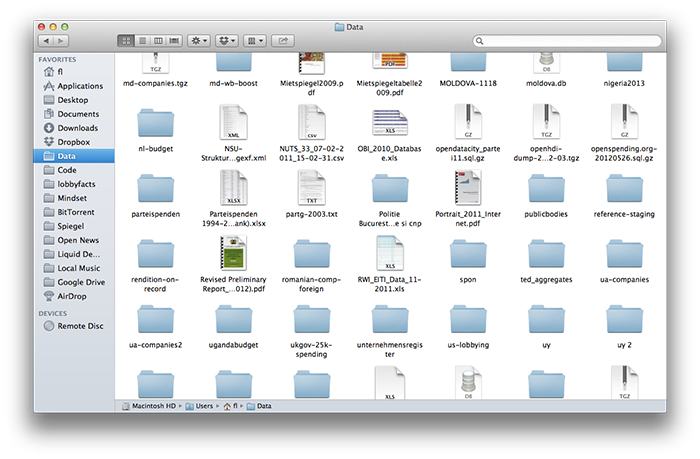 Like anyone working with diverse datasets, I've built up the misc folder, random bits of data without much context.

A data management approach for a news organisation might include a variety of goals, many of which are, of course, similar to what the larger (open) data community is facing:

This, of course, is not a good list to start off with - it’s just a set of related concerns to keep in mind.

What are people doing now?

Luckily, instead of having to start from scratch, we can already see some of the strategies used by other media organisations and their data teams.

My information on the Guardian data blog’s approach to this may be a bit outdated, as most of the people I spoke to no longer work there. The team’s key tool was Google Spreadsheets, with every story linking to its source data somewhere in the article. Often, a GSpread table would even be embedded into the article.

Lisa also mentioned that they kept a meta-sheet internally, a list of all the spreadsheets and the stories they related to. This may be somewhat redundant, however, given that all the sheets are linked up from the article anyway and the whole blog is a SEO treasure trove - the way to find things is probably through Google.

This meta-sheet is also something that I’ve seen used by the FarmSubsidy project to coordinate the acquisition and reporting on European farm subsidy data. Their tables list the source location, state and last change for each year’s batch of data for each member state.

One of my favourite approaches was demoed to me by Martin Stabe at the Financial Times: all of their graphics and data reporting staff have access to a shared MySQL database. When a new dataset is collected, it becomes another table in this database. Over time, this has lead them to create a massive collection of tables which are easy to query and can be joined up for ad-hoc relationships.

The obvious downside of this approach is that it has a fairly high barrier to entry: even with tools like phpMyAdmin, a relational database is probably not every reporter’s idea of a comfortable working environment. The FT’s solution to this appears to be teamwork, with reporters and members of the data team collaborating on projects where needed.

Platforms to the rescue?

While these approaches are very pragmatic, it’s doubtful how well they scale both on a human and a technical level. Of course, there are a few efforts to develop platforms to assist journalists in managing their data assets.

Probably the most relevant software project to data management in a newsroom is the Panda Project, another Knight Challenge winning project from 2011. Panda tries to capture all the little spreadsheets and tables that would result from a newsrooms daily operations and gives them a permanent home.

Welcome to PANDA! from PANDA Project

The developers put a lot of emphasis on ease of use, so the effort required to upload data would be minimal. At the same time, they chose to base much of the platform around full-text search. This may be useful in order to find names of companies and people in the data, but for statistical and other measurement data, the search makes no sense. Since the only other option is to download the entire dataset, Panda simply lacks a good way to handle numeric data.

CKAN, the OKFN’s widely-used data catalogue, is another possible solution to keep track of datasets. Since its 2.0 release, the platform features an attractive user interface and decent data previews. My concern about using CKAN for data management (as opposed to its publication) is that unlike tools like GitHub, CKAN doesn’t integrate into a workflow but rather relies on the user to fill out forms to document their actions.

Interestingly, this concern was rejected by folks at Spiegel, pointing out that form-filling is something that can be enforced via policy within the organisation. I’m not entirely convinced of this, so it seems like there may be an interesting experiment to be had here.

While it may be a bit of a long shot, I’m also trying to find out if the next version of the Investigative Dashboard may be able to play such a role in newsrooms.

Finally, there is an entire category of business intelligence tools (like Pentaho or its commercial competitors) that could help manage a complex data warehouse. I’m not sure how these tools fit in well with an incremental approach to building a data architecture at Spiegel though.

What is to be done?

For the moment, Spiegel’s documentation unit has set up a massive storage server running Postgres as the core data system. Reporters and researchers will be given access to this database using a visual database client, and I’m busy importing a few core datasets based on public statistical databases.

Once this is running and has been adopted by some of the research staff, I’m keen to actually run the CKAN experiment and too see if this very structured approach will succeed. At the same time, I’m hoping that other people may be aware of better solutions to this challenge - so: how does your news organisation manage its data?